Noise is generally regarded as interfering with our ability to detect signals. Static on a radio station or nearby conversations in a crowded room tend to obscure or distract our attention. However, studies in a wide range of physical and biological systems have shown that the presence of certain kinds of low-level noise can paradoxically improve, rather than degrade, the transmission of information. Examples of "noise" improving the ability of sensory systems to detect stimuli, which would not be otherwise discernible, are now abundant. This counterintuitive phenomenon, known as stochastic resonance ('SR'), is the driving principle behind Phoenix's insole technology.

Discoveries from computer models and human experiments have shown conclusively that random, low-level mechanical or electrical signals presented directly to sensory neurons can significantly enhance their ability to detect weak stimuli. From a clinical perspective, of particular importance is the research of James J. Collins, Ph.D. of Boston University, a recognized leader in the field of biomechanical engineering. Dr. Collins found that when a sub-threshold mechanical vibration was applied to the surface of the skin, the nerves that are responsible for our sense of touch were far more able to detect external pressures and vibration than without the stimulus.

Stochastic resonance's method of action can be most simply explained by likening the functioning of a sensory nerve to that of a camera flash. Before a flash is ready to fire, it must transfer a certain amount of energy from the camera's batteries. And, having fired, it must recharge itself before firing again. Similarly, a mechanoreceptor captures mechanical energy from an external stimulus and converts it into a stored electrical charge. When the nerve has accumulated enough energy to reach its firing threshold, it discharges, sending an electrical impulse to the brain.

Phoenix's insole device takes advantage of stochastic resonance by non-invasively delivering an imperceptible, random vibration to the mechanoreceptors on the sole of the foot and to the surrounding joints and muscles. This stimulation continuously excites the sensory neurons to a level just below their firing threshold. Consequently, even a small external stimulus will cause the nerve to respond. This increased flow of sensory information traveling from the body's peripheral nervous system effectively restores the brain's ability to properly sense external forces acting on the foot.

The effects of stochastic resonance stimulation are dramatic. The chart below illustrates data from a clinical trial published in the Archives of Physical Medicine and Rehabilitation. The study examined the effect that a stochastic resonance stimulus had on the ability of diabetics to detect an external force on the first metatarsal of the foot. As can be seen from the chart, the sensitivity of every diabetic subject improved in the presence of SR stimulation, with perception thresholds decreasing by an average of 31% and the performance of some subjects increasing by more than 50% from baseline. 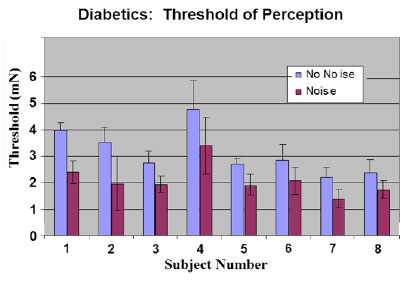 The ability of Phoenix’s product to improve pedal sensibility has been demonstrated in 14 clinical studies involving over 400 participants. These studies were conducted at prestigious research facilities such as Boston University, Harvard Medical School and the Joslin-Beth Israel Diabetes Center and have been published in preeminent, peer-reviewed journals such as Nature, The Lancet, The Journal of Neurophysiology and Physical Review Letters. Phoenix is confident that the impressive gains in tactile sensitivity that its device has established in the clinic will provide important health benefits to those diabetics with advanced peripheral neuropathy and, based on the literature, meaningfully reduce the incidence of foot ulcers in this high-risk population.

Phoenix uses these and other related technologies in its current and future products.